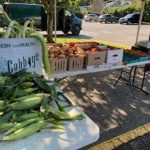 Familiar vendors and many others will return to the 9/11 Park on Saturday, June
4. This will be the opening day for the Amityville Village Farmer’s Market
operating Saturday mornings from 9 A.M. – 1 P.M. until October 15.

Sponsored by the Bay Village Civic Association, the market has been at this
location on Broadway, across from Peter’s Diner, for many years. At the civic
association tent, Amityville on the Bay emblazoned tees and other clothing may
be purchased. Funds are utilized towards projects to enhance the Village.

Residents have enjoyed purchasing fresh farm products from a Mattituck farmer,
as well as delicious baked goods from Baked at Home, Horman’s pickles, bread
and cheese from Mama Monte’s, coffee and more.

Look for clothing, craft products, and other special items. Often music will be
provided for shoppers’ enjoyment. It’s a delightful way to see neighbors and
friends while shopping in a safe, outdoor venue. 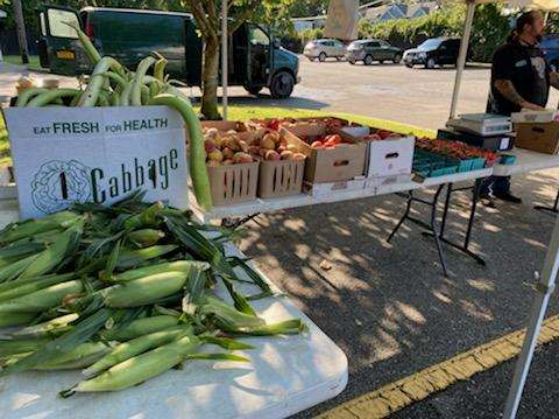 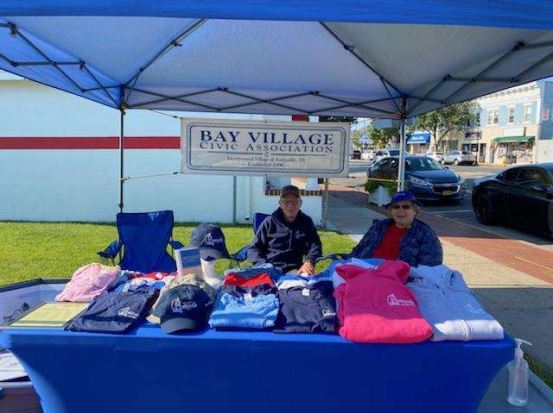 Tom was awarded a beautiful plaque by Joan Donnison, on behalf of the Bay Village Civic
Association, in recognition of his years of service to the Village, as well as his many
accomplishments.

Kevin Smith, representing the Village of Amityville, addressed the assemblage and presented
Tom with a certificate of recognition. NYS Senator Brooks was unable to attend but sent a
proclamation to honor Tom, too.

When all the honors had been rendered, Tom spoke eloquently about his history in the Village
and efforts to continue a legacy begun by his late father, former Mayor Lou Howard. It was
under his stewardship that trees were planted along the streets in the Village.

Tom expressed gratitude to former Mayor Jim Wandell for asking him to chair the DRC, and to
Mayor Siry for allowing him to continue in that role. He also gave a call out to founding
members of the committee……Kevin McAndrews, Tracy Cullen, Peter Casserly, and the late
Peter Keller for their expertise and advice.

Many lovely baskets were auctioned. The winners were delighted, as were all the attendees.
Unqua was aglow in sunlight and smiles.

It was so nice being together again on a wonderful occasion. As the BVCA president noted, the
prior year, COVID necessitated negative PCR tests or proof of vaccination to attend. We seem
to be entering a better phase. She wished everyone well during the year. 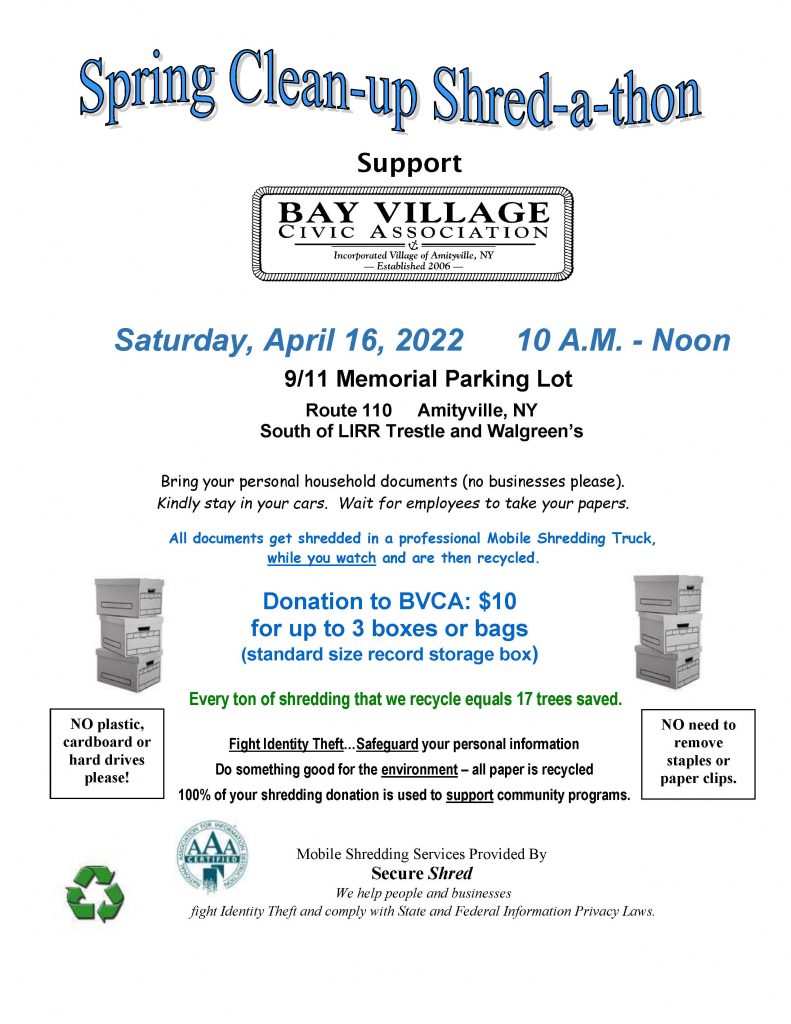 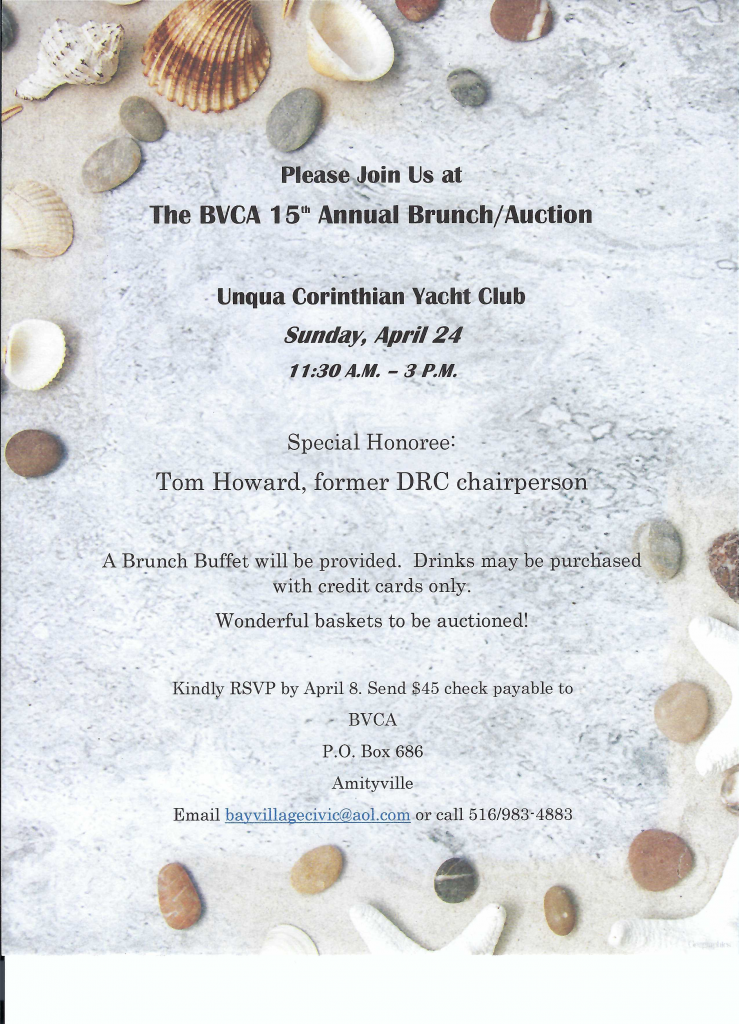 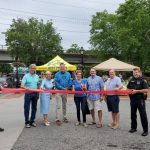 The Amityville Village Farmer’s Market returned to the 9/11 Park on Saturday, June 12. The BVCA is pleased to again sponsor this community event.

The farmer from Mattituck brings his seasonal harvest. It increases with the growing season. Shoppers eagerly anticipate the corn season. The current harvest, including strawberries, is enjoyed by all.

Baked at Home, featuring carrot cake and many other delicious baked goods returns. So does Horman’s Pickles, Mama Monty’s Breads, Nautilus Coffee, and many others. Be prepared to shop for weekend guests and parties. Your guests will be impressed.

Don’t forget to buy soap, crafts, and clothing too. The BVCA has Amityville by the Bay clothing, replenishing their goods constantly. We will attempt to order a size or color of your choice when placing larger orders. Many thanks to our volunteers!

The Market is open from 9 A.M. – 1 P.M. every Saturday until October 9. Check Facebook if strong storms are predicted. Otherwise, we’ll be there! Don’t forget to stroll through the Village after visiting us. Shop and dine locally. 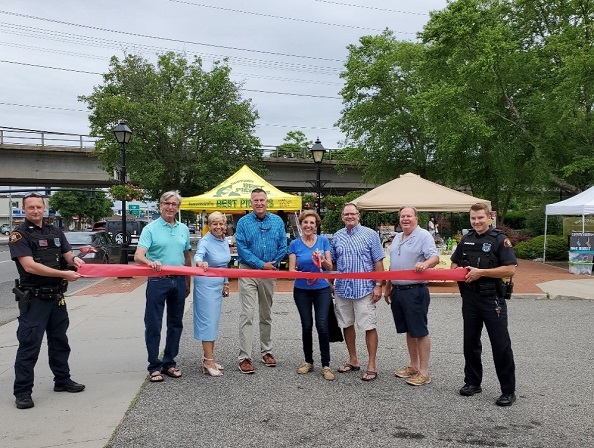 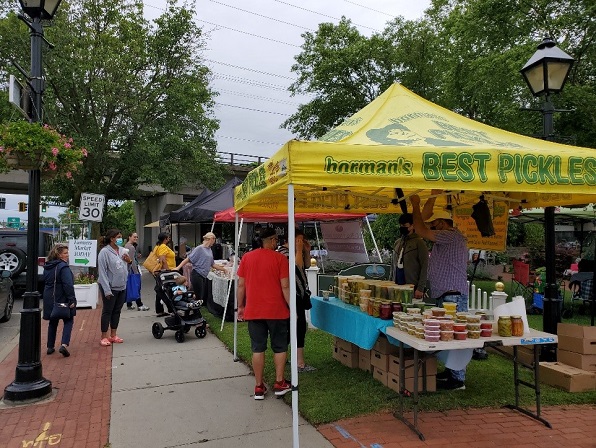 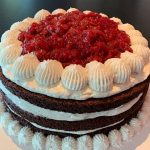 Peggy Stroh has always cooked & baked. Leaving behind a career as office manager and expeditor she turned to her first love – baking – five years ago when demand became so high. Typically she will be at it evenings from 6-11pm during market season but her busiest time is Easter and Christmas. She uses her own recipes and yes she samples as she goes; her favorite is the chocolate chip cookie. Her repertoire includes ginger, chocolate chip peanut butter and oatmeal butterscotch cookies. She also does the very popular carrot cake and takes requests for others. For holidays she makes a tri color pastry, dessert parfaits and a Superbowl Phylo goodie. Also available are breads: Sourdough, white sandwich, Jewish rye & cinnamon rolls. Adding to this since there were many requests, she has added Sauces: Marinade, bourbon and steak & everything, chili, tomato bisque & butternut squash soup. There is usually a line at the Amityville Farmers Market (June through early October). She does not have a website but can be reached at their Facebook Page or on Instagram or by phoning 632-225-6452 ….and looking ahead she is considering a brick and mortar store in the neighborhood. We are so lucky to have her products! 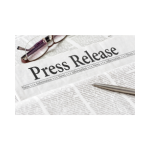 The raffle was held in January at the BVCA monthly membership meeting via Zoom. Gift cards were valued at $25 each and grouped in twos from each shop. The winners received $50 worth of cards for an establishment.

Whether you won gift cards or not, perhaps you took your special someone out for Valentine’s Day. You may have also ordered a wonderful take-out meal for a candlelight dinner, or lunch/brunch. Enjoy these meals any day! It is hoped that this project will assist these “eateries” through this particularly difficult time.

The BVCA encourages residents to continue to patronize all local shops. At a past membership meeting, gift cards valued at $25 from all local small shops in the Village were also raffled to members.

The dues and money raised through fundraising have supported such projects. While the BVCA greatly appreciates this, it also recognizes the efforts of Board member Rhea Albert Darling who went to each location to make the purchases on behalf of the civic association.

For more information about the Bay Village Civic Association, visit them on Facebook or go to www.bayvillagecivic.org. You may also email them at bayvillagecivic@aol.com. All local restaurants and shops need our support. We certainly want them to be there when this COVID nightmare is over! Continue to wear a mask and stay safe. Try to get the vaccine, too. Things will improve, but we are still on the road to better days. It takes a Village………. 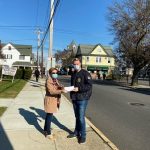 During this extraordinary time, the Bay Village Civic Association Board decided to do something unusual.  Rather than solicit donations from local businesses for an annual fundraiser, $25 gift cards were purchased from each of them!

A free drawing of BVCA members was held on Monday, November 16 via a Zoom Membership Meeting.  The names and gifts were announced at that time.

Following that meeting, the winners were contacted, and gift cards delivered.  Members were asked to pass the cards on to someone else who might use them, if not something they might choose.  This was the civic association’s effort to bring shoppers into the local businesses.  It was a win-win for all.

While the gift cards were purchased from Village of Amityville shops which had supported the BVCA in the past, all small businesses are wished the best during this challenging time.

Whether looking for gifts, chocolate, clothing, spas and salons, places to dine, etc., support our local small businesses.  Everyone notices when a shop is empty.  If we want less of that, we all need to step away from the computer, put on a mask, and go out shopping in our beautiful neighborhood.  It takes a Village. 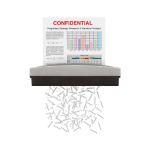 A Community Shred Event will take place at the 9/11 Park on Saturday, November 7, from 10 A.M. until Noon. This is located on the east side of Broadway, at the train trestle, across from Peter’s Diner.

Sponsored by the Bay Village Civic Association, a $10 donation will enable you to see three bags or boxes of personal papers shred on site by Secure Shred. The company asks that clients stay in their cars while awaiting employees who will take papers. Please wear a mask when giving your donation to a BVCA volunteer. During the pandemic, many have been cleaning out closets and offices. This is a wonderful way to ensure your papers with private information are securely destroyed while giving back to the community.

The donations are used to help fund community scholarships and projects. In the past, the BVCA has donated a pergola at the Dog Park, Village entranceway signs, anniversary flags, etc. Many scholarships have been awarded annually to high achieving and community-minded Amityville Memorial H.S. students.

For more information, contact the Bay Village Civic Association at bayvillagecivic@aol.com, or go to their web site www.bayvillagecivic.org. 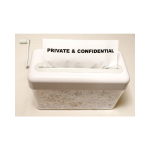